Ewe Herd We Explored The Kgalagadi? 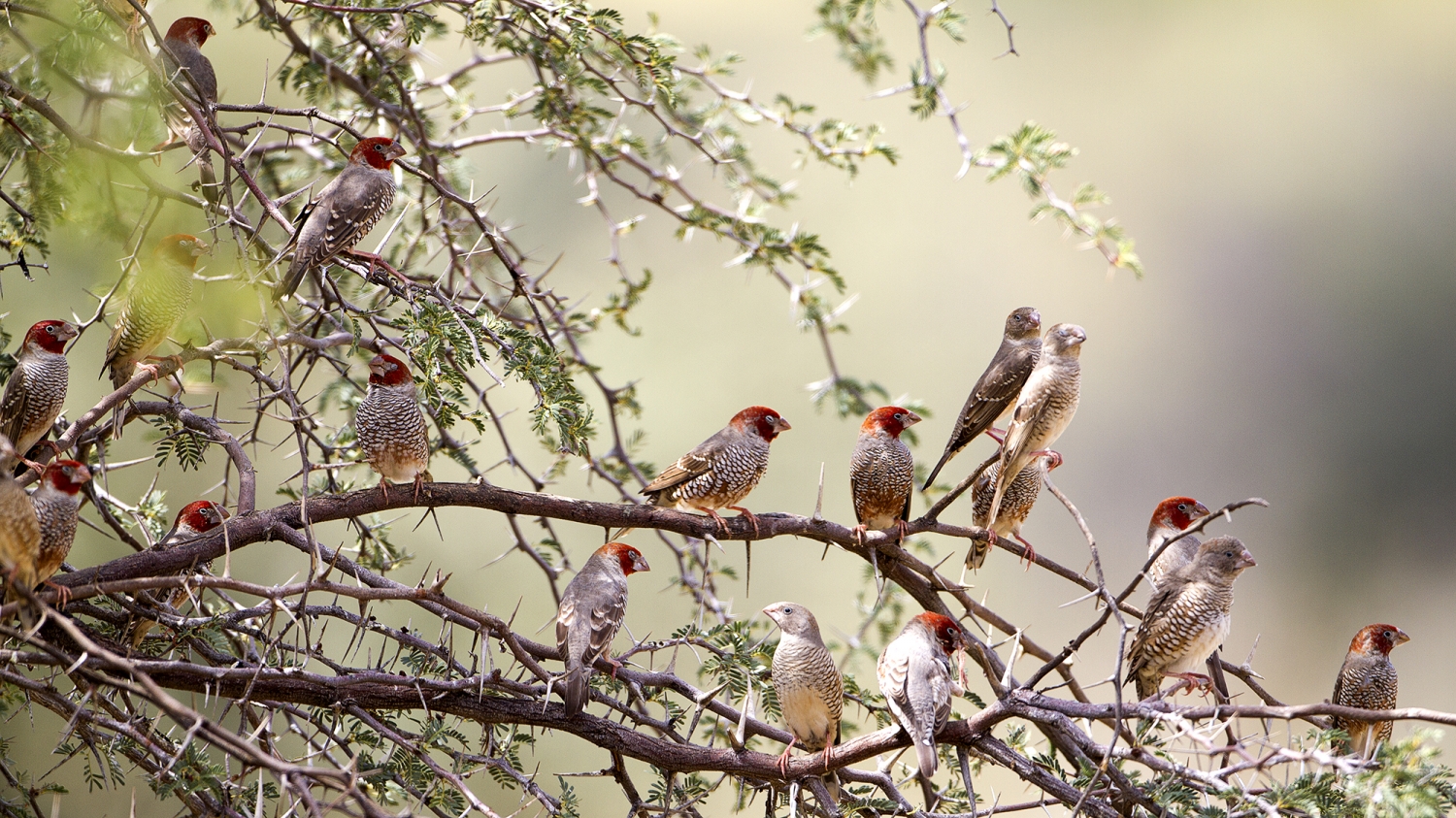 We shrew did and Veareax eagle to meet you! I Gnu we’d have a fabulous time.  I haven’t felt the sun on my skin for days and feel cheetah'rd.  That’s the sort of thing I do when I’m cold.  With this thought, I decided to cheer myself up and click through some of my photographs of our recent trip to the Kgalagadi.

Summer rainfalls had been prolific, and the veld was swathed in a kaleidoscope of grasses.  Having worked in the fashion industry, I could make a list describing the shades of green carpeting the red dunes of the Kalahari. To relive the experience, I close my eyes and imagine apple green, sage, fern, moss, mint, pine, silver birch, wheat, lime, pistachio, camphor, and asparagus, to name but a few.  We saw them all.

Animals were hard to spot, and we took our time at waterholes enjoying the large flocks of birds swooping down to drink, refresh and fill up to feed their chicks as the Namaqua Sandgrouse do.  Little birds are my fascination, and I’d have my camera ready to capture their antics.  They’re always so cheerful. Bateleurs came to drink at midday; they stayed for a while, making it easier for photographers to get some really good portraits.  Their bright tomato red beaks and expressive eyes a joy to behold.

We’d sit for hours trying to catch a Namaqua dove on the wing, and we were surprised to see two Abdim Stork one day while watching a ground Squirrel burrowing away.

Waterholes and other pans or suppressions in the earth were filled with water giving animals ample choice and space to drink at many spots in the veld.  Soon we began noticing water birds arriving and had to laugh out loud at the sight of two Red-Billed Teal paddling for all their worth. Now it’s hard to believe we saw Grey Herons and the Abdim stork.

When it’s difficult to spot animals on the ground, then it’s automatic to look up and see what’s in trees. Birds are in trees. Sometimes they also indicate what’s going on on the ground, e.g. Lappet-faced and White-backed vultures circling in the thermals or roosting in trees can be an indication of a kill nearby.  We did see them on a kill a few times.

The rainy season is the time for breeding, hatching and preparing the young to leave the nest.  Large thrums of ostriches were seen everywhere as parties of males and females herded young ostriches in nurseries.  Those chicks were adorable. The large communities was something we'd not experienced before

Finding the Spotted eagle owls nesting was one thing; photographing them was completely different; trying to position oneself to avoid camouflaging branches was quite a feat.  We did see them on a few occasions, and the shots I got tell me a story.

Thanks to a friend, I learned how to identify the furball an owl regurgitates. Unpicking the feathers and fur revealed a treasure-trove of the tiniest bones of the rodents and small animals the owls noshed on—one of the highlights on this trip.  I will post a film about that later.  Below I've posted a pic of the contents of one such fur ball.

On the rare occasions that we did see Lilac Breasted Rollers we'd try to capture them in flight.  My trigger finger would spasm eventually, but, alas I'm too slow. So the best I can do is  a portrait of this beauty.

I Gnu we’d see Wildebeest, but, as with most species, the implausibility of Wildebeest was a surprise! Springbok and Rooihartebeest leisurely migrated from waterhole to waterhole, young animals protected from ever-present predators.

Our reservations for this trip were made during our hard lockdown a year ago.  We were able to secure campsites for 14 days at Nossob and three nights at Mata Mata before heading home.  Once again, our reservations were made on the SANParks website, which is user-friendly and easy to manage.

The staff at both campsites do sterling work, and the management of these camps is top-notch.  The shop was well stocked. We ordered delicious Roosterkoek from the bread lady and, on one occasion, a loaf of bread too.  On our daily trips to the bird hide, we’d sit on the bench and attempt sending WhatsApps to family and friends, but that seldom happened without a rise in blood pressure. By day four, we kicked that idea into touch and stayed incommunicado; that’s when the holiday started.

One of the highlights of this trip was meeting Erica again. She’s one of the housekeepers and has a laundry service as a side hustle.  On two occasions, I handed over a bag of laundry, and later in the afternoon, she’d deliver clean, ironed and folded laundry—a real treat.

Guests have to line up to report and sign out before leaving camp for game drives or moving on to a next destination.  At the crack of dawn there's quite a queue, and that’s where one hears all the latest animal gossip.  Where the cats are and what the best sightings the evening before were.  I made it masked most mornings with my ears pricked to hear little tidbits.  Little did I know about the nocturnal shenanigans and who would be sleeping where until a contingent of game wardens, staff and the snake catcher pitched up with a long broomstick with a hook and a cardboard box.  They were there to catch a gimongous puff adder snoozing on the step a mere 4 meters from me.  Not good. I’m an ophiophobia sufferer. Although soon captured, the sight of the fleshy reptile dangling mere meters from me did not bode well.  I was petrified but faced my fear heroically.

(Some researchers believe phobias related to reptiles (and snakes specifically) may be evolutionary, developed by our ancestors as a survival mechanism.)

It was not surprising to see so many snakes, considering the rodents explosion we encountered.  All due to the abundant grass seeds, I suppose.  The little mice were the cutest creatures and would forage and dig wherever they could, many in the road.

Shockingly we found road kills had increased tremendously and often saw bat-eared fox had been knocked down. They’re nocturnal and seldom seen, which made these scenes all the more tragic.

We saw raptors galore, in this garden of Eden and the abundance of food it was a shopping day for falcons and eagles.  They could pick and choose to their heart's content.

Our Honey Badger, with its height, served us well, and we’re sure we could on occasion, spot a well-camouflaged buck, lion or jackal when other visitors couldn’t. We weren’t disappointed and saw a pride of lions with cubs, a lone male marching majestically down the road, and the unexpected couple resting under a bush in the road.

Once again, we met the most interesting like-minded campers who shared their experiences with us, our neighbours Aloma and Ras, Bakkies and Anne-Lee, (who showed me what lurked in a furball) , Jack and Chris, a retired couple from France who’ve not let a Covid lockdown deter them.  I’ve good reason to believe they’re currently in the Serengeti, having travelled through Namibia, Zambia and Kenya since we saw them. These passionate retirees live up to the words boldly emblazoned on their vehicle “Rather be small and shiny than big and dull”.  Neville and his wife, Belinda, rekindled our love of Vietnam as we recalled our experiences there.

Everything about the Kgalagadi was different this time; trees were covered in green leaves, probably hiding a sighting which our unaccustomed eyes missed, roads ribboned through fields of grasses. There were many times I almost dared to stick my arm out of the window to feel the velvet veld caress my skin.

Kalahari sunsets never disappoint; we experienced an electric storm with bolts of lightning and thunder flashing all around us.  During the full moon, we were rewarded with a golden ball lighting up the evening skies.  Only once during our stay did we hear lions roar during the night. Strange. We did have barking geckos, the lone jackal calling; after the rains, centipedes came out and with legs syncopated, they skedaddled across the sands to safety. We did not encounter any scorpions.  Ignorance is bliss.

My favourite time was the thirty minutes before I’d drift off to sleep, enjoying the solitude inside our Honey Badger, wrapped up in my linens; I’d think or read while sipping hot chocolate before turning off my light. The African Scops owl’s distinctive soft, frog-like “prrup’ the only company I required.  I was thoroughly content in my cocoon.

Of course, we had some issues to deal with when our batteries sent out putrid signals that they were giving up the ghost, and our brakes let it be known that we would have to stop in Upington for some maintenance work. There’s always a balance in life.  With the good comes the not so pleasant—the sandwich of life.

I believe we witnessed a once in a lifetime occurrence this time. Should I be so fortunate to visit again, the Kgalagadi will be clothed in shades of orange, mustard and ochre.

Let's get on a magic carpet and fly away to the Kgalagadi in the Kalahari to get away from all the destruction, heartache and despair that's ravaged our country.  It's only in nature where we can be yanked back to rest and see with a new perspective. Let's listen to the twitter of fiery finches and hear the soft winds whispering through grasses.  Just for a moment.... until we catch our breaths and face our reality.