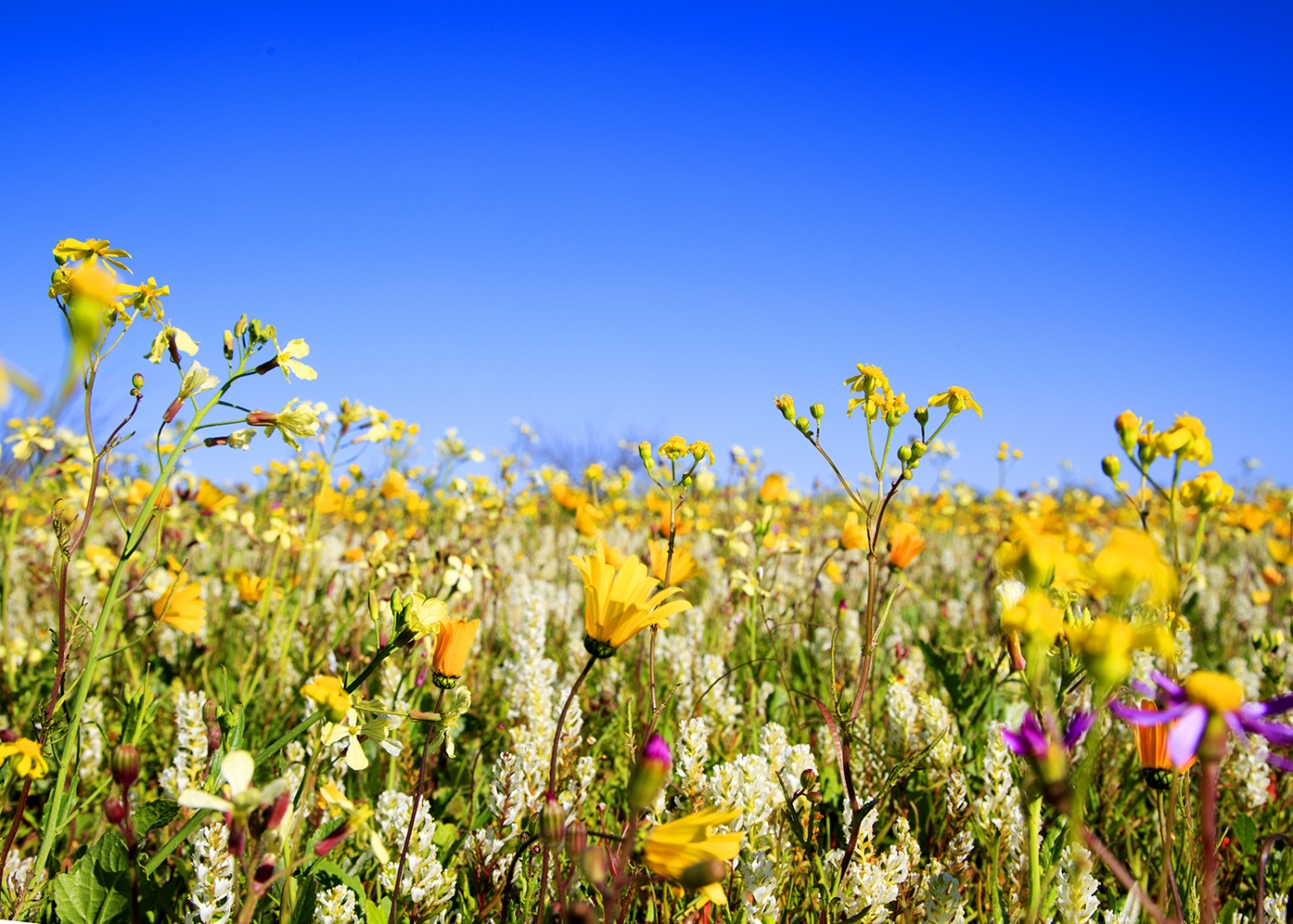 Every year at about this time a wayward uncle would stop over in his rusty, vintage Kombi, to stock up on fresh supplies, before setting off on his annual pilgrimage into the Namaqualand to paint.  My father-in-law would beckon him into his flat, stepping back from the front door, frowning and shaking his head in exasperation. The retired Colonel didn't think being an artist was a real job.

The metallic clanging of a shifting spanner on an engine part would signal the last chores being done before he’d set off.

After slamming the screeching engine shut Oom Piet would brush the tousled fringe off his grease and paint-smeared forehead and with a roguish twinkle in his eyes, he’d wish us well. We’d wave. A gaggle of children running down the road sending him on his way as his Kombi (circa 1964) billowed balls of grey smoke, choked, rumbled and coughed while the exhaust spewed noxious gasses. We prayed he’d not succumb to the turpentine fumes suffusing his cramped quarters.  With a toddler on my hip, regurgitating his last feed, I’d wonder why he did it.

Memories of Piet van Heerden came flooding back as we meandered through the Namaqualand last weekend.  He couldn’t wait to get away.  This slightly stooped, small man, impatiently, wringing his hands and bouncing on the balls of his feet in anticipation of his sojourn in the wilds.

35 years later, I know why he’d park off in the middle of nowhere, put up his easel to paint, finishing every drop of paint, covering every square inch of canvas in swathes of yellow, pink, orange, magenta, ochre, French blue, slate, sage and terracotta. It was the intoxicating beauty that did it.

Near Kamieskroon I saw the quiver tree nestled in rocks he’d sketched, now hanging in my kitchen.  In Garies his favourite Namaqualand daisy, his Madeliefie.

All along the Bidouw Valley, my stomach clenched with excitement. A witness to the radiance and grandeur he depicted in his oils.  I could imagine him and his friend and mentor Hugo Naude, perched on rickety canvas chairs, frayed Panama hats askew, shirts flung off as they enjoyed the sudden heat of spring, working furiously to capture a field of vygies or botterblomme before sunset.

I visualised him setting up camp to capture the carpets of flowers amongst the ruins at Skilpad. Sannie, his companion,  would explain graphically why the undulating mountains concertinaed, shaped the way they are, naming each rock or stone she held tenderly in her hands. She’d know the mysterious things I wish someone could teach me.  Glaciers, ice ages, deserts and the influence of weather conditions on these desolate places.  She knew about the Ooswind blowing off the sea, about clouds and she’d name the littlest flower and bulb.

How he traversed the steep mountain passes in that clapped-out Kombi will always remain a mystery.  Probably in donkey gear like we did. Slowly.  All our cogs locked in 4x4. “Never put your foot on the clutch” Butch warned me.  I listened.  We hugged the mountain as we descended.

This year rainfalls have been excellent. Streams are still flowing, the earth saturated.  Hamlets along the way testament to hardened communities of shepherds and stock farmers.  Their handsome goats, fat sheep and asses roaming freely, grazing on new shoots.

The fires that destroyed much of Wuppertal, a beautiful Rhenish mission village – are still evident and a testament to the horror a devastating fire can cause. Reconstruction is underway to its thatched-roofed buildings and church. Boisterous children still play soccer in the dirt streets dodging the fast-flowing furrows, the town’s water supply. It was laundry day, and wash lines were filled with freshly laundered clothes gaily flapping in the breeze.

Twice we’d go onto a shoulder to let a Toyota pick-up pass as it grinds its way up the steep, gravelly mountain roads to a hidden farm further up into the Cederberg.  At the end of each mountain pass, we’d stop, jump down, to stretch our legs and lower back, breath and look back in wonderment at our achievement. “Good job Honey Badger” I’d think while patting her flank before hauling myself up into the cabin once again.  The descent through the Cederberg into Wupperthal a 30km drive took three hours of concentration.

Covid19 has given us a golden opportunity to explore our own magnificent country. It’s to be grabbed with both hands.  I always remind myself that Europe and Asia will not change much in the foreseeable future. Italy, Paris and quaint tea-rose bedecked English villages will be as charming in a decade or two, but, Africa is changing irreversibly all the time. Future generations may not experience what we take for granted.

Jackson Pollock would’ve thrown something like this together.  After all, he said
“It doesn’t make much difference how the paint is put on as long as something has been said. The technique is just a means of arriving at a statement.
My painting does not come from the easel.
Every good painter paints what he is.”

That's true, here Nature is the artist and once a year, in spring, a dry, desolate canvas is turned into a voluptuous, sensual, and intoxicating landscape. An all-consuming garden of nature's delights.

At the moment, every social media page, website, newspaper, WhatsApp message, YouTube clip is all about Namaqualand.  We are awash in colour and inundated in tips of where to go, what to eat, where to stay or camp.  I will not bore you. I’m sure if you know the area, you’ll recognise landmarks, my photos are not in chronological order, from the start of our road trip in the Cederberg,  ending with our last night wild camping in Strandfontein. I did try but somehow they got all mixed up.

Although Norway predicted the weather, we were not as clued up about wind conditions.  On most days there was a breeze blowing which made photography a little more complicated and I had to use really fast shutter speeds to slow things down which meant a high aperture etc.

At times the sheer magnitude of the vast areas awash in blooms was overwhelming. I tried to capture the “uitblinker”, the individual making a statement.  I do love an underdog.  We enjoyed walking amongst the flowers where possible, ever mindful of our footprint, but, mostly stayed on the verges.

The large herd of Gemsbok (Oryx) we spotted was well camouflaged and at a distance, but, they posed and allowed us to move on.

Although I have not managed to photograph even a handful of species to reference and identify later, I include some of the blossoms we saw.

The Honey Badger behaved herself, no punctures and no surprises.  What we did struggle with was our Garmin iOverlander and ordinary Garmin (yes, we had both).  Although Butch had spent hours plotting our route on his laptop, with waypoints marked etc. It was frustrating to realise that nothing had downloaded onto the devices, no matter what he did.  Fortunately, he knows the area well, and he’d memorised the route. We made it without getting ourselves lost and, what’s more, we made unexpected discoveries and had a real adventure, just like the olden days.

There are two diesel tanks for fuel when the main tank's empty a switch is activated to pump diesel from the auxiliary tank. The pump failed on the second go.  Fortunately, we were on our way home and fuel was readily available.

At my behest, we schlepped the bicycles along. I had visions of going for long rides every day. Sadly there was no time for that. They will not be accompanying us on similar trips again.  This time all they did was gather dust.

Ingrid Jonker had the words to express what  I ruminated about while we were driving in our beloved Honey Badger. Oom Piet and Hugo Naude did the same splashed on canvas. 2020 is unique in every way, fortunately, there's always a balance. Hope. "All is well with my soul."

Oom Piet had the recipe, the talent and the passion to live in harmony with nature, I wish I'd listened and learned more.

"Flowers... are a proud assertion that a ray of beauty outvalues all the utilities of the world." Ralph Waldo Emerson 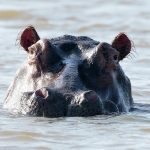 Wellies Or Winter Warmers - A Trip To Lake Jozini 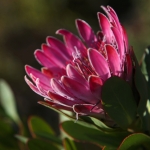 Head In The Clouds - At The Frame House 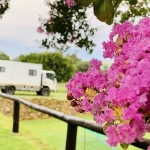