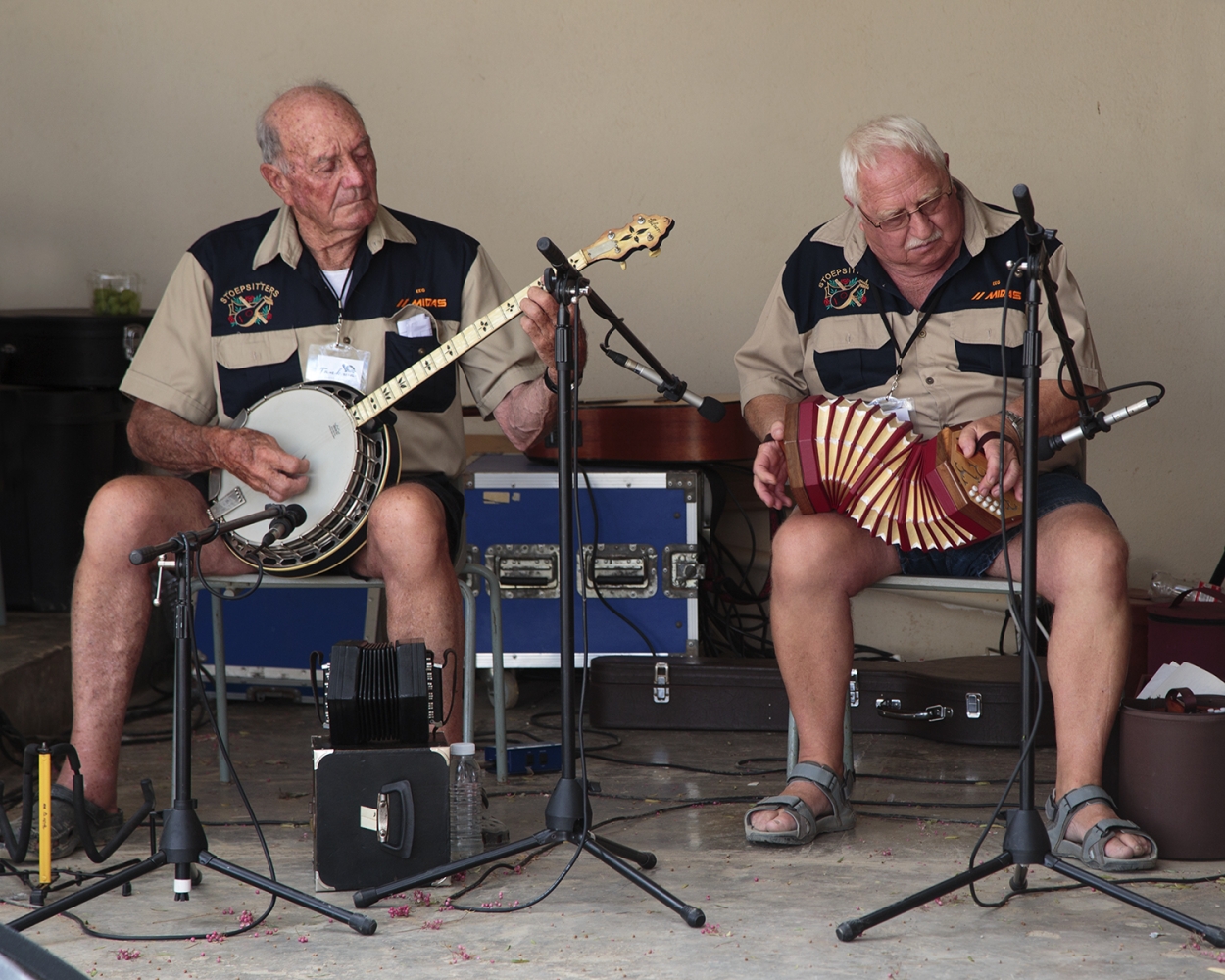 Pompelompie Hartklop (Heartbeat) Festival. The heart of the Karoo beats in its people. They are a hardened community, resilient and steadfast in their faith and in the land. Here every person is worthy.

So, one fine day Butch comes along and suggests we go on a road trip to Middelpos. I’d never heard of the place, but, I was game. He needed to continue with his mission to put the Honey Badger’s rims through some tough paces. The dirt roads would do it he said.

Drought stricken conditions have prevailed here for years and farmers are at their wits’ end with animal stocks dwindling due to harsh climatic conditions. We would be contributing to a very good cause as the festival was a fundraising exercise.

It wasn’t until he’d read the programme for the weekend’s festivities that he got cold feet. There would be the one boere orkes (traditional orchestra) after the other for the duration. Every hour a new orchestra would take over. This he thought would be a bridge too far! The list of bands was a reflection of their popularity. I was surprised. The who’s who would be there.

As subtle as he could he sent me the program to give the once over and make the final decision with the loaded question “Do you really think you’d like to go?”

Of course, I couldn’t wait and wouldn’t miss it for the world. I could hear his sigh of exasperation a mile off.

A little background info is always helpful and a friend who’d lived in Victoria West was quick to inform me. The whole town belonged to one family. The whole caboodle. This included the school, police station, shop, service station, hotel, clinic and a few homes. We were to camp in the Middelpos Hotel’s back yard along with several other campers. We could use the ablutions.

MTB attorneys and a local farmer Francois du Toit kindly donated a truck load of beautiful, export quality table grapes, a treat in Middelpos I’m sure. Everyone went home with at least one punnet of fresh, crispy grapes.

We made it home without one flat tyre or leaky rim. In a 20km stretch I counted 28 ruined tyres lying along the side of the road. These roads are hard.

Before we set off, with our eBikes securely strapped on it was noticed that our front left hand tyre was losing air. A slow puncture. Fortunately we realised in time and off the truck went to an exasperated Mossie, who, I’m sure, cringes when he spots us coming down the road. Our new rim had a leak, a welding mishap. Mossie was able to inject some magic “glue” into the crack and so far so good.

We set off in good time to make it to Middelpos by mid-afternoon on Friday. Just before we tackled the pass to Sutherland we noticed a watering hole. Tjol Se Gat. Interesting. We could wet our whistles before setting off again. Tjol, with his long grey beard, certainly is a colourful character and loves his life far from the maddening crowds.

The bands were starting to arrive and set up their equipment for a weekend of jolly music as we arrived in Middelpos after negotiating some of the worst dirt roads I’d encountered in a long time. A good test. The rims held.

In no time we’d parked and set ourselves up. We moved to join the other travelers on the big veranda. Lunch was being served. I tucked into a delicious Lamb Curry, Karoo style. More turmeric than curry, but, not lacking in flavour. Deliciously served with sweetest watermelon. I couldn’t resist a second helping. What tickled me most was the absolute lack of presentation, garnishing or finesse. Two large saucepans were unceremoniously plonked onto the table, with a pile of bowls, cutlery and paper serviettes. Tuck in was the message received.

As the sun set the bands started up. Soulful country music. The plonk of a guitar and the rich reedy sound of an accordion filled the air. These musicians were passionate about their music as was evident in their renditions of popular tunes. The audience was captivated. Soon there was much foot tapping and some Sakkie-Sakkie two stepping going on. That’s what it was all about. Followers of the bands (Groupies would be too strong a word) came from far and wide to support their “teams” as we later learned.

The earth had to cool down before we could enjoy the Cheese and Wine spread put on by local ladies. There were beautiful homemade breads, cheeses, lovely canapes and fruit laid on. Butch and I set our camping chairs up, settled, had our drinks and snacks and then watched the world go by until it was time to head off and let the “younger generation” enjoy themselves.

On Saturday morning we couldn’t resist a lie in before joining the crowds. With our breakfast hamper (these were reserved and paid for when we confirmed our reservation and received the programme) in tow we had a delicious coffee from one of the many stalls set up. Pancakes, bazaar puddings, craft beer, craft gin and delicacies unique to the Karoo could be bought from stalls lining the dusty dirt road. Main Street.

For lunch I nibbled on crispy, fall off the bone Skaap Stertjies (sheep’s tails), liver in netvet (liver encased in caul), roosterkoek (perfectly made by local ladies) served with tangy apricot jam and Kaiings (crackling). Delicious. Unbelievable that it’s taken me so long to have such deliciousness! This alone made the trip worthwhile.

Aneen Nel, a photographer, gave a very insightful interview all about her 365 day photographic journey which she started after the still birth of her baby daughter which she published daily on social media going from relative obscurity to celebrity as women from all walks of life started following her finding her daily stories therapeutic and healing.

The policemen/woman on duty were friendly and even posed for a photograph on the shop’s stoep when I asked. They had no qualms about being in uniform and proudly showed off. I was impressed.

The general dealer aptly named Die Winkel (The Shop) must be one of the last of its ilk, doubling up as a shop and post office.

Butch and I enjoyed all the activities, but, mostly enjoyed the chit-chat (I am an accomplished eaves dropper) all around us. Later when it became really hot children, young and old took themselves off to the swimming dam to cool down. Some of the older generation went to “lie down” and some of us just lolled about enjoying the passing parade. Can you remember swimming in a cement dam? I think all children of an age did.  I clearly remember how the cement corroded the pads of my toes!

A country festival will never be complete without a show of strength. It's bound to happen. That Herculian thing testosterone secretes. Two teams were quickly rounded up, the fittest, strongest, weightiest specimens for the tug-‘o-war. After lengthy discussions about the rules the men put their heels back and pulled. No clear winner could be decided, but a lot of fun was had by all.

I enjoyed a delightful conversation with one of the band members from Williston Stoftrappers, a maestro on his bright red accordion. Johan has the ability to engage with his audience, include them in a sing-song and even the most unaccomplished, all fingers, musician feels part of the entertainment while they drum, shake or beat on one of his instruments. He has a sure following and I could see why! Don’t ever stop Johan. In case you aren't awar; you certainly have a way with the ladies!

A spit braai is a given and so it was on Saturday evening too. With our re-cycled cardboard picnic boxes we had supper under the huge pepper tree as couples danced and enjoyed the perfect Karoo evening. Later, as Butch predicted, we heard rumbles of thunder and flashes of lightening and then big drops of rain fell. This was our cue to retire.

The rain came down in glorious buckets. We woke on Sunday morning to a wet Karoo. Large puddles everywhere.

Before departure we were invited to join the owner of the hotel to breakfast before setting off to the Tankwa Karoo and the beautiful Gannaga pass leading down from the plateau. For lunch we stopped at the Tankwa Padstal before heading home.  Stepping into the front door is like stepping into a 1960's time machine.

Well done to the organisers who made sure all take-away or food packaging was recyclable. Not only was it practical but aesthetically pleasing too. Much nicer than Styrofoam. The Karoo knows all about climate change and they’re being proactive.

A retired railwayman, the owner of the Karretjie, mule drawn cart, reminded me that we should never forget our roots and where we come from. His children have migrated from the Karoo and now live in Cape Town, very grand they are he says. A wise man.

Middelpos might not be the most exciting destination on the map but, it’s a destination with character and hospitality bar none. A good stop on a road trip and a popular destination for bikers.